May 6 Benefit Concert at Crossroads Theater 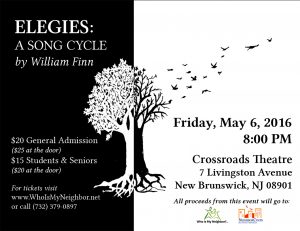 Benefiting NeighborCorps Re-Entry Services & Who Is My Neighbor, Inc.?

This is Carl’s farewell concert before he joins the Peace Corps! Come hear this fabulous pianist and hear a remarkable musical event!

“The work is breathtaking in the depth and breadth of its commentary on the rewards and woes of being part of a family, of a group of friends, and of a society in good times and bad. The 19 separate pieces were composed in memory of Finn’s friends, several of whom died of AIDS. Three songs deal specifically with the passing of his mother, Barbara Finn. The final set of songs deal with the collapse of the World Trade Center and its emotional aftermath.

“In a review of a regional production in 2004, the reviewer wrote: “Never morbid, Elegies is touching, funny, and ultimately buoyant; floating on the spirits of those who inhabit its songs. The styles and tones range throughout the musical from the unabashedly optimistic — “Life has infinite, infinite joys!” — to the hilariously irreverent.”