A group of 23 people spent a week in August in North Carolina to repair homes damaged by a tornado that hit the eastern part of the state in April of 2014. Representative churches included Spotswood Reformed Church, the Reformed Church of Metuchen, and the Reformed Church of Highland Park. The trip was led by Anthony DiGrigoli, Harry Pangemanan and Daniel Woo (student minister). Here is Anthony’s summary:

Our group stayed at a campground in Washington, NC for the length of our stay. We stayed in two trailers, one that was finished and another that was not. The finished trailer had a living room, dining room, washer and dryer and full kitchen. The other was made up of bunk beds and an unfinished kitchen, but both were air conditioned. There was a dining hall with a big kitchen Comparable to the one at the church. Meals were prepared by Jean, Sandy and Anthony. We had a chore chart that helped us to keep everything clean and in order.

The group of 8 went on to install under-pinnings (skirts) on double wide trailers. That group was led by Daniel and John. John was our onsite contractor who trained and worked with the team of 8. The group were amazed with the skills and guidance shown by Sammy in how to use the hammer to your work rather than your own force. They were also impressed with Judie’s level of energy and persistence despite her years. John’s dog Bailey also went along to the job site. They met some of the home owners while on site. Tim, his wife and David.

The group of 15 was led by Harry and Anthony and was accompanied by Cliff. Cliff manned the small back hoe to dig a trench for a new water line. We met the home owner, Cathy. She came every day to help us carefully demolish the old house. This house was lifted 10 feet and moved to the side five feet by a tornado in 2014. Cathy was in the house while this happened. It is believed that the house did not continue rolling away when it came into contact with the huge roots of a felled tree. Since Cathy was there so much we all had a chance or more to talk with her and get to know her story. She introduced us to her five horses and speaking personally, made me feel like what I was doing was a great help. Aside from the demo we also were there to install a water line for Cathy’s new home. Anthony, Jonathan, Amber, Christine and Keiko worked together to glue the PVC pipe needed for the water line. By the end of the trip we were able to draw the pipe from the new house all the way to an area just 30 feet from the water line hookup. We had to halt work on the waterline to continue demoing the home. We were careful to demo the house in order to 1. be safe, and 2. re-purpose the windows and undamaged wood to a barn Cathy wants to build for her horses. Harry, Chris, Mike and Amber worked to remove the roof from the house. As debris was taken down from the structure it was then moved to piles and either taken away to a dump site or stacked up to be used for the barn. On our final day there we took pictures, hugged, prayed and cried. Even Cathy cried. It was hard to leave. Cathy made a point to say that we were the hardest working bunch yet! I know that meant a lot to our group.

On Sunday we attended service at The First United Methodist Church of Washington NC.

Daniel was in charge of Devotion which was led in the living room of the finished trailer. Keiko and Jonathan were in charge of music for our time of devotion. One evening we had devotion around the campfire and roasted s’mores. Every night we shared how we felt about each other and reflected on our work and how it pertains to God. I found that the youth in our group have been blessed with an enduring love of God. I did not see this as much growing up and it gave me hope that these people will be growing in a world that needs more of God’s love and kindness. We sang every night and despite working in the hot sun for hours, we were awake and present for prayer. 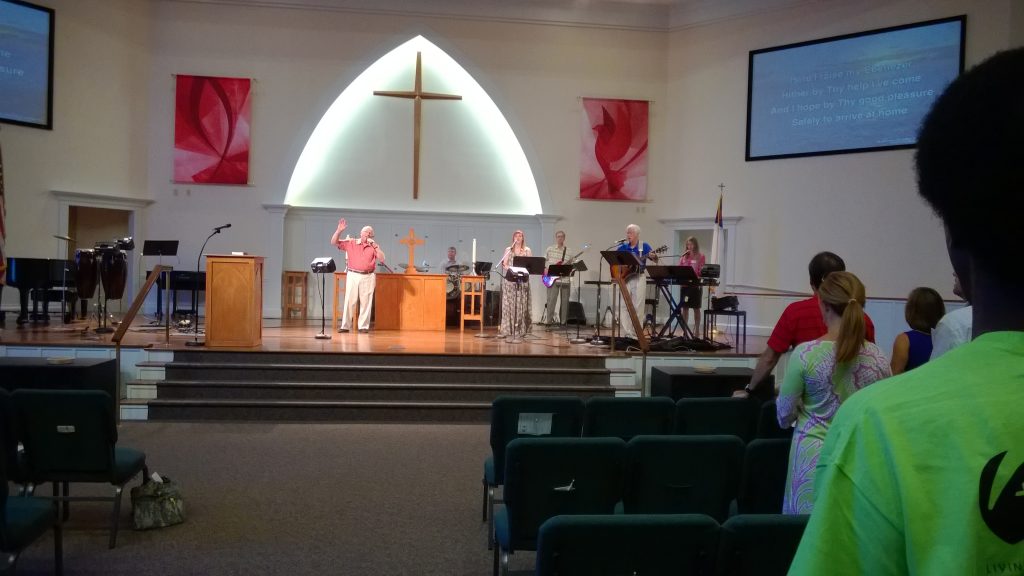 After devotion the evenings were mostly spent playing cards and hanging out. There were a few times when we went out into town for ice cream or to eat at the local Golden Corral and the group of 8 had a chance to eat at Boss Hogs (a local favorite). We visited Goose Creek to swim for a bit as well. On our last day, Amber asked if we could go to the Waffle House. I had always wanted to go and we drove past so many along the way that we ate there for breakfast on our last day in NC. The manager at the Waffle House in Washington NC said we were the largest group that had eaten there so they took our picture. I recommend stopping by and saying “Hi” to Raven the waitress there. On a stop at a rest area in Maryland we ran into none other than Lara Arp, one of our RCHP church members!! No kidding!! She was just as surprised as we were. I think both our parties felt like we were that much closer to home after seeing her familiar face.